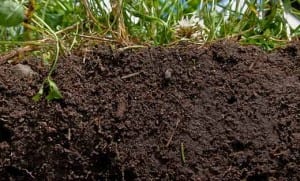 The next time (perhaps next week?) that your boots get mired in the brown ooze at your feet, don’t think of this with resignation as mud season but as the prelude to that soil beginning its wondrous work for Spring growing. It is amazing stuff, though we call it ‘dirt’ and often treat it as such. Soil is living matter – there are more microbes in a teaspoon of soil than there are people on earth.

The Maine legislature last week became the first in the nation to pay tribute to the critical roles that soils play in our lives by passing the Joint Resolution Recognizing the Importance of Soils to Maine’s Future Prosperity during this historic United Nations International Year of Soils.  The resolution was sponsored and introduced by Representative Welsh of (D- Rockport) and cosponsored in the Senate by Senator Tom Saviello (R-Franklin).

We think of soil and agriculture together, but clean water, abundant forests and a way of life rooted in natural resources/the outdoors also depend on soils.  Soil can be the source of public health advances, too.  Recently, scientists from Northeastern University isolated a bacterium from a sample of Maine soil that fights infections but appears not to lead to antibiotic resistance.