LEWISTON/AUBURN – The Good Food Council of Lewiston-Auburn (GFCLA) recently announced that its Community Food Charter received endorsements from the City Councils in both Lewiston and Auburn.  After hearing a presentation from GFCLA staff and membership at a previous meeting, a resolve supporting the Charter was passed by the Lewiston City Council on September 20th.  Auburn’s City Council passed their resolve on October 3rd. 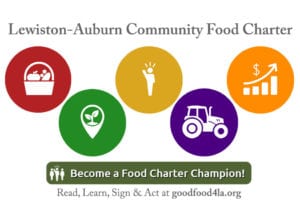 The Charter is a statement of community beliefs with a focus on food. A growing number of communities in the U.S. and Canada have Food Charters, and Lewiston-Auburn’s is the first in Maine.  The Charter was created as a tool to raise awareness of the importance of the local food system, to provide a framework for discussion by community members and decision makers, and to provide a consistent, focused approach over time. It will be used to help inform new projects and move ideas forward aimed at creating better access to good and affordable food.  Individuals and groups are encouraged to visit the GFCLA website to endorse the Charter and show their support.

In addition, several Senators and Representatives representing Lewiston and Auburn at the State House shared a letter of support for all the work done by GFCLA on behalf of the community.  The letter states, in part, “Your vision for a food-secure community and your charter as a means for realizing that vision are truly inspirational.”  The letter was signed by Senator Libby and Representatives Rotundo, Lajoie, Brooks, Golden, Bickford, Melaragno, and Sawicki.

These announcements kick-off a slate of activities highlighting the local food system in advance of National Food Day on October 24th.  National Food Day is meant to inspire Americans to change their diets and our food policies. Every October 24th, thousands of events all around the country bring Americans together to celebrate and enjoy real food and to push for improved food policies.

Locally, Mayor Robert MacDonald of Lewiston and Mayor Jonathan LaBonté of Auburn are both expected to issue proclamations declaring October 24th Food Day in the twin cities (read linked proclamations: Lewiston and Auburn).  Residents are encouraged to participate in planned events and to take personal initiative during the month to highlight local resources for an improved food system and a healthier, more locally-based diet.

One such event was attended by over 150 people – an L.A. Greendrinks gathering on Wednesday, October 19th at Wallingford’s Hard Cider Tasting Shack on Perkins Ridge Road in Auburn. The event was 5pm to 8pm and GFCLA was the featured organization of the evening.  The Lewiston-Auburn chapter of Greendrinks holds events every other month highlighting a local non-profit doing environment-friendly work in the area.  Attendees are encouraged to bring a friend and join in the fun to learn more about the featured cause and enjoy a beverage with like-minded attendees.

The Council was formed in the summer of 2012 to create and support improvements to the food system of the Lewiston-Auburn community.  It educates the public and serves as a forum for discussing issues, fosters coordination between sectors in the food system, evaluates and influences policy, and supports programs that meet local food needs.  For more information or to read and sign the LA Community Food Charter, please visit goodfood4la.org.

You have Successfully Subscribed!