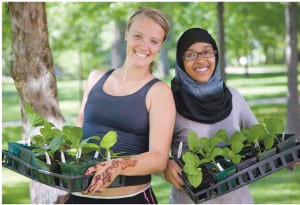 Gardening together in downtown Lewiston.

Much is made these days of food as a pivot point for community development, a sort of lever for community engagement and action. Why? On the face of it, the answer is simple: food can bring people together, and people acting in concert drive change.

One growing though not new model is the community food council. A food council knits together a wide variety of people for a specific set of food-related goals. It can be formed at a local, state, or regional level. The structure depends on how the group organizes itself and the purpose for which it is formed. The motivation to form a council can range from fighting food insecurity to creating food policy, but a common theme is an integrated approach to improving the food system.[1] The approach takes a comprehensive view of all of the players, processes, and infrastructure involved in getting food from land and sea to table. It also incorporates the physical, psychological, and cultural ways in which food touches people’s lives. Such a systems approach recognizes interconnectedness, limits unintended consequences, and gives lift to the whole.

The Good Food Council of Lewiston-Auburn (GFCLA) formed in late 2012 as the next step in an effort dating back to 1999, when organizing began around an urban garden project in Lewiston, Maine.[2]

The Meaning of Good

Lewiston is Maine’s second-largest metro area. Its demographic profile speaks to the severity of the challenges it faces. It is home to the state’s highest childhood poverty level. Ninety-eight percent of students in a downtown elementary school are eligible for free or reduced-price school meals. And over the last 10 years, the resettlement of large numbers of refugees, mostly from Africa, has presented a different kind of challenge, requiring adjustments for both the existing population and the immigrants.[3]

The GFCLA envisions a community bustling with people sharing food that is healthful, affordable, and accessible, one that honors enduring values, cultural heritage, and diverse needs. Food that is good in every way is the GFCLA’s central organizing tenet. It is food that provides nutrients for healthy, active lives and enables children to learn better and to play. It fits cultural and religious beliefs, is grown in a way that treats producers with respect and provides them with a livable wage, and supports local businesses. It nourishes not only human bodies but the planet—so that soil and water can provide the nutrients needed to grow food in the future.

In 2008, a Community Food Assessment (CFA) began in Lewiston.[4] A CFA is a collaborative process that examines food and agriculture issues and assets within a community or region. Key to the effort was grounding the work through citywide charrettes, community-action research, and small planning sessions called “good food gatherings.” The idea was to uncover mutual-gain scenarios—ways in which the entire community could benefit from food-related interventions—using existing resources. As the initiative transitioned from research to planning to implementation, the assessment work expanded to include Auburn, and the council model was adopted.

The GFCLA released the completed CFA in December 2013 at a well-attended community forum.[5] It focused on access to healthful food, particularly among populations with limited income.[6] The CFA and concurrent research highlighted the following:

Armed with this information and the outcomes of community meetings, the GFCLA began its work. 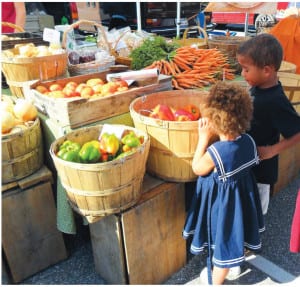 The Council is a strong advocate of the year-round Lewiston Farmers’ Market.

Much of GFCLA’s first two years was spent on internal process, priority setting, and councilor education. But now that many members of the Lewiston-Auburn community recognize the value that agriculture and food play in creating a vibrant, economically viable community, the insights are beginning to have ripple effects:

Economic Development – Grow L+A, a nonprofit, seeks to rehabilitate the 345,000-square-foot Bates Mill 5. The 1914 Albert Kahn–designed former textile mill sits along the Androscoggin River in the middle of Lewiston-Auburn’s downtown. Its rehabilitation could support a revitalized regional food system, improve downtown viability, create jobs, and strengthen local businesses. The aim is to include a vertically integrated food chain within the facility and to investigate the potential of a local food aggregator. Grow L+A used the CFA to attract grants to fund the research and to conduct a feasibility study.[9]

Transportation Planning – The Androscoggin Valley Council of Governments (AVCOG) is tasked with routinely evaluating the twin city bus routes. The CFA painted a fuller picture of the experience of someone living without a vehicle, including a description of one resident’s two-hour round trip to the grocery store. Given that existing bus routes had limited evening and no weekend service hours, expanding the bus routes was identified as critical. Funds were allocated to expand routes and create limited Saturday services. Today the routes are among those with the highest ridership. AVCOG has requested additional input and recommendations from the council to inform its next transit review.

Research –The work of the council has enabled student and professional research at Bates College, the University of Southern Maine, and the Muskie School of Public Service. Currently a project led by Bates students is assessing the local farm-to-institution landscape and developing a deeper understanding of existing opportunities and challenges to increasing institutional purchase of local foods. This research could be coupled with similar research in other parts of Maine and begin to form a body of knowledge that would support state-level policy initiatives.[11]

Priority Setting – Organizations have used the council to help connect the dots between concurrent yet disparate efforts, thus enabling partners and community leaders to tackle the issues that they are best equipped to address. For instance, early findings of the CFA highlighted the limited access to and high cost of fresh produce in downtown neighborhoods. As a result, St. Mary’s Nutrition Center worked to strengthen the local farmers’ market and developed complementary programs to support low-income customers. Through this effort, the number of market vendors grew fourfold and both a winter market and a farmers’ market incentive program for SNAP- and WIC-eligible consumers were established.

Broader Impact – The GFCLA is a leader in a new movement in Maine. Individuals on the council have been instrumental in building the Maine Network of Community Food Councils. In addition, the council has two representatives on the steering committee of the statewide Maine Food Strategy, an initiative that looks to local councils for data and information to develop clear goals and to become implementation partners down the road.[12] 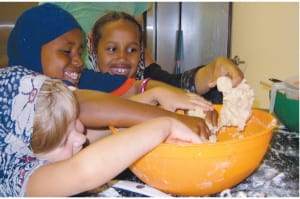 But the impact of the GFCLA is perhaps more powerfully about individuals and relationships. One council member notes that, as a father, he has gained the knowledge and vocabulary to be able to explain to his children where food comes from and what makes a healthy food system. As a local certified public accountant who has farmers and producers as clients, he is able to bring awareness to his clients about the issue of food insecurity and the potential for expanding into new markets.

The GFCLA is just beginning to hit its stride. The needs are monumental and require systemic change. The CFA created a data baseline, but the council still needs to develop quantitative measures of progress. To date, the council’s greatest success is seen in a deeper understanding of the regional food system, the intangible formation of relationships, and the network of partners needed to make change within the community. The GFCLA is committed to supporting the greater Lewiston-Auburn community’s development of a thriving food system that supports healthy people, vibrant neighborhoods, and a strong local economy.

Daniel Wallace is a program developer at Coastal Enterprises Inc. and a counselor on the Good Food Council of Lewiston-Auburn. Julia Harper is the Good Food Council coordinator. Deborah M. Burd is grants manager at St. Mary’s Health System in Lewiston, Maine. Contact them at goodfood4la@gmail.com.

[1] The USDA Economic Research Service describes food security as access by all people at all times to enough food for an active, healthy life. With food insecurity, consistent access to food is limited by lack of money or other resources. A food system is defined as all the processes and infrastructure needed to get food from the field or ocean to consumers. It includes production, processing, wholesale and retail distribution, waste management, and support systems such as transportation, education, city and town governments, and emergency food providers.
[2] See Kirsten Walter, “Somalis in Maine: Collaborating on Gardens and Nutrition,” Communities & Banking 22, no. 1 (winter 2011), https://www.bostonfed.org/commdev/c&b/2011/winter/Walter_Somali_garden_Lewiston.pdf.
[3] For interactive demographics on Lewiston, see the Boston Fed’s New England City Data tool, http://www.bostonfed.org/commdev/data-resources/city-data/index.htm.
[4] Kirsten Walter, “Local Food for Lewiston: Exploring the Role of Food Assessment as Part of Broader Work in Community-Engaged Food Systems,” Maine Policy Review 20, no 1 (winter–spring 2011), http://digitalcommons.library.umaine.edu/cgi/viewcontent.cgi?article=1041&context=mpr.
[5] See http://goodfood4la.org/resources/communtity-food-assessment/.
[6] Access is defined here as the availability, affordability, and appropriateness of healthful food options.
[7] The data—high poverty, low vehicle access, very few stores with healthy options—suggest that the population is likely to have poor health outcomes. In fact, 31 percent of adults in the area are obese. As other studies have shown, the connection between poverty and obesity often reveals itself in the food environment. Low-income individuals rely on cheaper, calorie-dense foods, often highly processed and less nutritious, rather than more expensive and less accessible healthier foods.
[8] Research conducted with the Muskie School of Public Service.
[9] A grant came through the Local Food Promotion Program, which offers funds with a 25 percent match to develop and expand local and regional food enterprises to increase consumption of, and access to, locally and regionally produced agricultural products and to develop new local market opportunities for farms and ranches.
[10] A collaborative effort of the Maine Department of Health and Human Services, Maine Center for Disease Control and Prevention, Maine Office of Substance Abuse, and the Maine Department of Education.
[11] See “Bates Contemplates Food,” http://www.bates.edu/food.
[12] See http://mainefoodstrategy.org/.
Disclaimer: “The views expressed are not necessarily those of the Federal Reserve Bank of Boston or the Federal Reserve System. Information about organizations and upcoming events is strictly informational and not an endorsement.”

You have Successfully Subscribed!