The Path to the Good Food Council of Lewiston-Auburn:

A Brief History of GFCLA and the Community Food Assessment

In 2008, Good Food for Lewiston-Auburn (GFLA), then Local Food for Lewiston, began a Community Food Assessment (CFA). This comprehensive study of Lewiston’s food landscape focused on building a deep understanding of where food resources are, how people access them, and what barriers exist to that access. It was spurred by the reality that, despite the many organizations doing important work to feed the city’s hungry and support local farmers, the unmet need was great and a collaborative approach to the problems was needed. This approach, the group realized, must benefit consumers, producers, and retailers—the entire community, in “mutual gain” scenarios. Although CFA research was limited to Lewiston, GFLA recognized that food issues don’t stop at the city limits and solutions must involve the larger L/A region. Appropriately, the GFLA moniker was adopted in 2011. 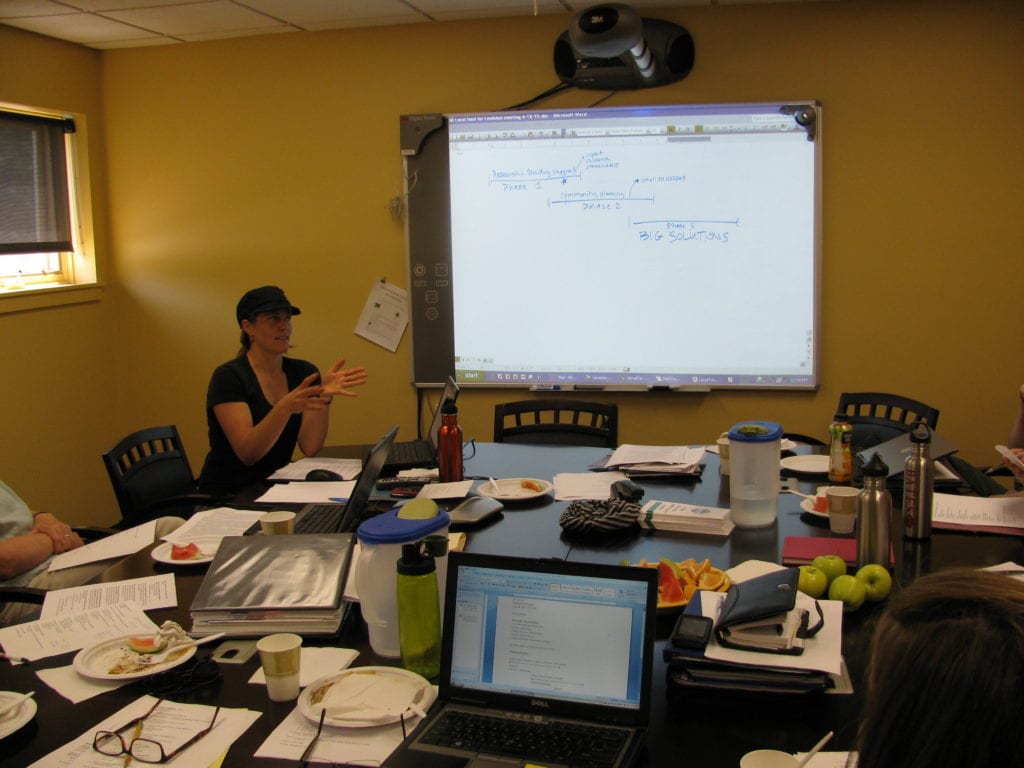 The CFA process was initiated by the St. Mary’s Nutrition Center in partnership with Bates College, USM, Healthy Androscoggin and the Downtown Education Collaborative (DEC). The DEC linked the study to academic partners from local colleges: students and faculty from Bates, USM, and the Muskie School of Public Service provided much of the research expertise and capacity to conduct the assessment. In addition, Healthy Androscoggin and several community members (some working as Community Action Researchers) helped the study effort, rounding out a robust partnership. Over the course of more than two years, the CFA amassed a wealth of data to paint a detailed picture of the local food system, with a particular focus on consumer access. Gathering and analyzing information was only one of the study’s aims. The process also aimed to engage a wide array of community members, organizations, and agencies (many of whom, it was hoped, would help determine and implement solutions), and to serve as a springboard for making change.

The basic questions that the CFA set out to answer were:

These questions determined the type of data that was gathered. Qualitative and quantitative data were balanced so that stories from community members either supported or disputed the hard facts presented by demographic and economic figures. Over 200 participants were involved— mainly residents, college students, and leaders in the community—and a wide variety of research methods were employed. In addition to reviewing literature and census data, surveying and mapping of food resources was conducted; emergency food provider (EFP) personnel were interviewed and observations were conducted at EFP locations; focus groups were convened; and surveys of downtown residents regarding food access were completed.  Once a significant amount of data was gathered, the GFLA workgroup brought together researchers and participants to analyze data in what was fondly titled an “Analysis Fest.” A complete list of the numerous research methods will be available in the CFA report, to be published in early 2014.

Following the completion of the first phase of research, GFLA hosted a charrette—an intensive planning session—in May of 2010 at the Lewiston Public Library. A gathering of 120 community members representing a diversity of voices came together to learn about the CFA process and give feedback on the information gathered. The event was successful and sparked people’s engagement in the ensuing planning process, wherein the information from the CFA would be combined with a public participatory process used to begin restructuring the food system to better serve the community. 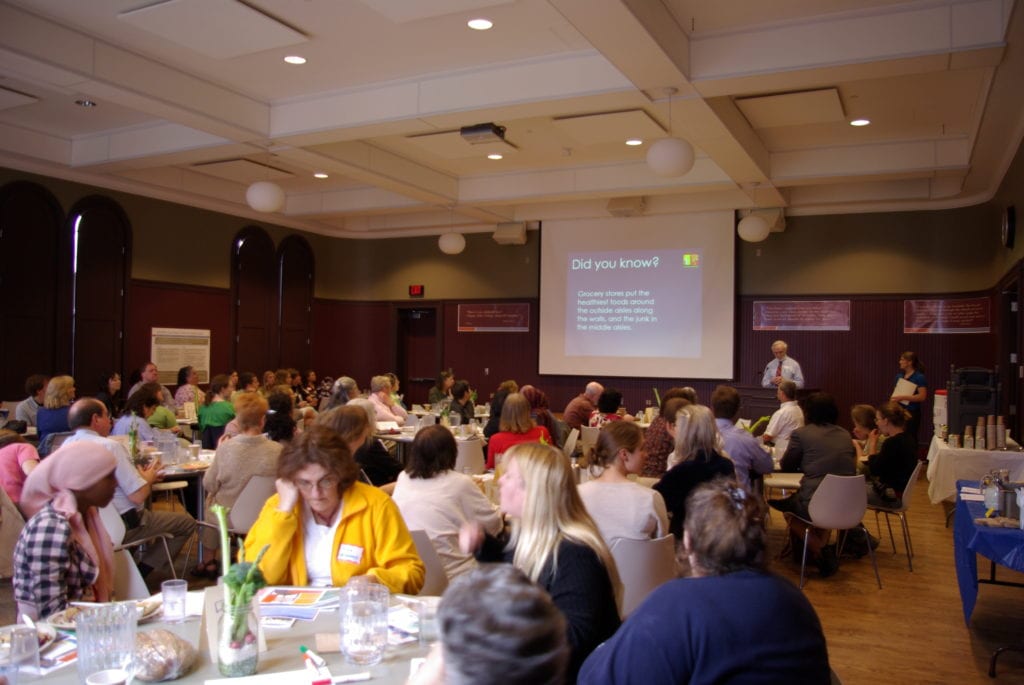 For many months GFLA staff toiled to translate the CFA data into a comprehensive and informative report, while still partnering with Bates and USM to conduct additional research. While this laborious effort continued, community input was again invited, this time through numerous Good Food Gatherings (GFGs) hosted over the fall and winter of 2011/2012. These informal events brought small groups of people together in the comfort of residents’ homes and community centers. All together, about 200 people attended, representing many sectors of the food system. At the Gatherings, participants envisioned what a healthy food system looks like in Lewiston-Auburn and proposed solutions towards that vision.

To distill and organize the output of the GFGs, two Analysis Fests were conducted in the spring of 2012. These events were attended by workgroup members convened by GFLA and grouped the numerous ideas emerging from the CFA and GFGs into seven Goal Areas, broad topics that are supported by more specific Goals and Objectives. The Goal Areas are: Education/Healthy Food Education, Accessibility, Affordability, Social Capital, Food Assistance, Production, and Availability of Healthy Food. 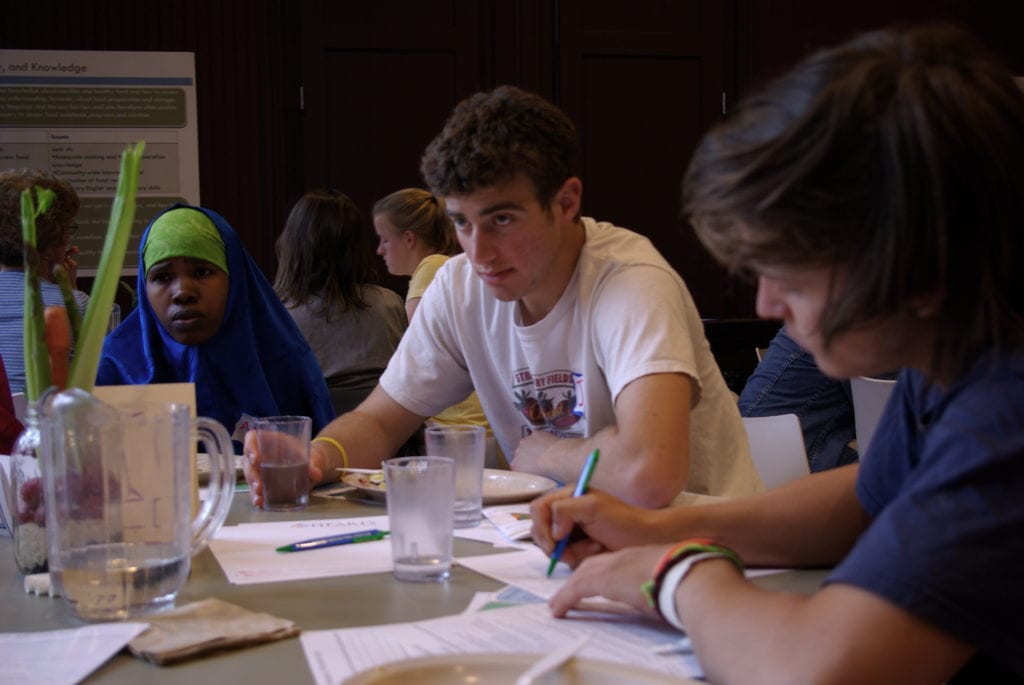 Echoing the event two years prior, in early May of 2012 people from diverse sectors touching on Lewiston/Auburn’s food system again filled the Lewiston Public Library for a Food Action Charrette. Representatives from municipal government, educational institutions, hospitals, local business, the Somali community, downtown residents, and many other groups, were on hand. Through lively discussions, the gathering prioritized goals for the Good Food Council of Lewiston-Auburn (GFCLA). Facilitated break-out groups, one for each of the seven Goal Areas, voted on the top Goals for each Goal Area, and the top Objectives for those Goals. Action plans were then generated for the Objectives, identifying what would be done, who could lead the effort, and who potential partners are. The work done at the event was understood not to be a mandate for the Council, but an expression of the community’s priorities and a suggestion for how to begin to address the Council’s work. The output of the event has been captured in a summary report that can be found here.